Assalamualaikum semua! Apa khabar. And good night to your all!

Ok, so today I have uploaded a (almost) completely incompatible version of YourAgregator. Version 1 is still there but it will never work, due to change in the Datastore. This is my last week of holiday and this sunday I will go back to CFS IIUM, for my ICT course. And because I don’t have a notebook and even more important, time, the development of YourAgregator may slow down to a halt. And yet, even thought I only have about three days left, I’ve uploaded a new version of YourAgregator that is largely incompatible with the previous one that I’ve purged the datastore, meaning, you have to reregister.

Ok, so whats the big deal about this upload? Well… actually, not much. The large incompatibility is due to the change in the name of most table and their property. And because GAE does not have ALTER TABLE, I’ve decided to just to delete the whole database and start from scratch. Not that people (other than me) use it right?

But there are some notable change in this release. The first major change is the use of Jinja2 template instead of Django. There are not much different between them except for faster rendering and more expressive language. And also because of that, some page may not render perfectly. If you found any of that, please email me at admin@youragregator.com

Another change is, i’ve added rss page, and member page to the agregator and some modification on the feed page (now the Post page). To view the rss page, on the feedroll, on any post, there should be a link of the title of the rss. Click the “>” next to it.      Ok, so it’s not so obvious, but hei! I’m not a designer. And it get the job done… in a way. Ok, so you click it and the magical AJAX sistem will change your current page to the rss page. What shown in the rss page depend on the data given from the blog. It should show the description (if give), the author, the title(the domain if not given), the submitter, and 10 list of recently posted post. Click one of the post to go to the post page (not the post blog) and click on the submitter name to go to the member page. 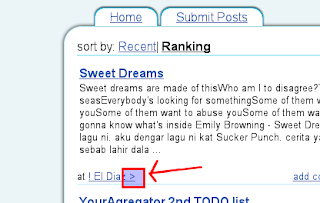 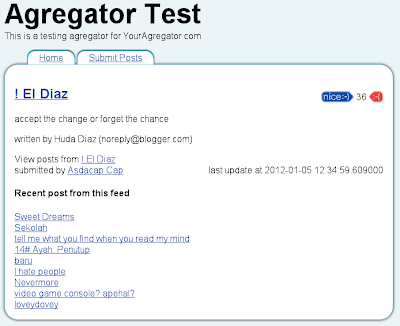 If you go to the member page, you will find a very hideously incomplete-looking page. The reason it is incomplete-looking, is because it is incomplete. The reason it is hideous, is because of me. This page will show you a large smile picture, a description and a link to show post submitted by that man. The large smile picture is suppose to be a profile picture. You can edit it by going to youragregator.com instead of it’s agregator and click on your username on the top right of the screen (next to the ‘logout’ button). 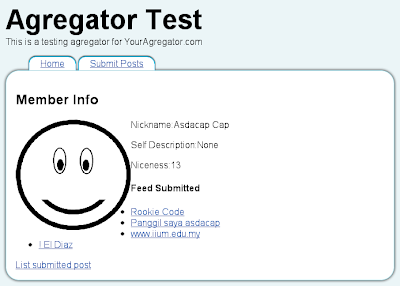 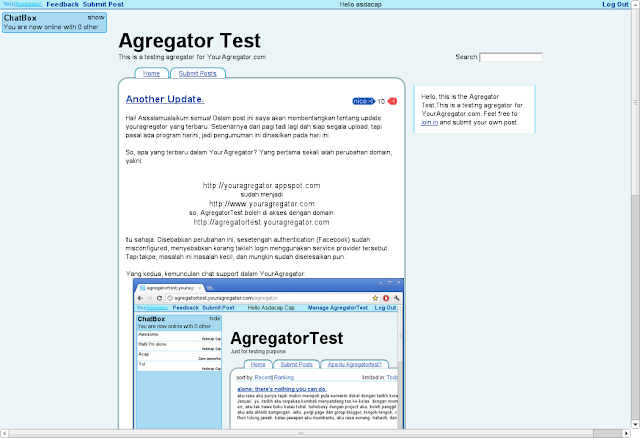 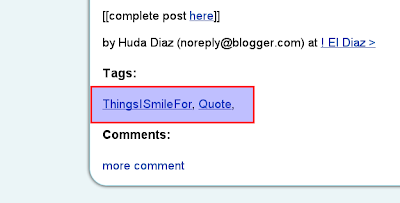 The feedroll also has several change. Firstly, the search function has been re-enabled. And because YourAgregator is running on free quota, and indexing takes a lot of database operation, the site can only handle about 6 to 8 blog submission per day. So, lets hope I can find a credit card somewhere, then we could turn on billing. Also, now the feedroll has the ability to filter by submitter, feed and tags. That allow me to put the tags link on the post page, and ‘view post’ hyperlink on the rss page. And also because of that, the index for the post table has increased and thus, increase the write operation required to add a feed and thus again, reducing the amount of feed submission available per day.

Another incompatible change in YourAgregator is the niceness system. Previously, a new post’s niceness is defaulted to the submitter’s niceness, and the submitter cannot nice his/her own post. Now, the post’s initial niceness is not defaulted to the member’s niceness, but to it’s rss feed’s niceness if it has one. Otherwise, the default niceness is the submitter’s niceness. This means a rss feed itself now has a niceness and it is defaulted to the submitter’s niceness. You can rate the rss feed at the rss page. The submitter can also rate his own post and rss submission. I’ve made the decision to allow it to allow the member to specify which post has more priority over another post. Previously a submitter cannot say which of his post has higher priority that another post.
Last but not least on the modest list of changes is the support for the PubSub protocol. The PubSub protocol, created by Google for Blogger has the ability to push new blog post to subscriber. In this case, the subscriber is YourAgregator and the new blog post is new blogger blog. In another word, when an rss is updated, the update is sent to YourAgregator immediately. Previously, YourAgregator need to periodically check for changes in the rss to know about new post, if any. Now, on certain RSS or Atom feed, notably blogs on Blogger, any new post will be sent to YourAgregator almost immediately after the blog owner publish it. This reduce YourAgregator’s need to check the blog and reduce the time need for the post to be indexed in YourAgregator.

And…. that pretty much concludes this update. And this will probably be the last update before my semester. Hopefully I may have some time to do some bugfix, but most probably nothing will change for the next 4 month. And hopefully, I can manage a visa card, and register for Amazon AWS, and all those index problem  will be increased but the capacity will surely increase. So that’s it, happy new year, goodbye and Assalamualaikum.

2 replies on “One Incompatible Upload”

what the hell men, you made all that alone, and that is the awesomeness of this app! 😀

find a designer, that’ll help a lot. i mean A LOT. haha

A designer will really help a lot. I mean, A LOT. haha